Kino Bermondsey regularly runs special events alongside its film programme, including question and answer sessions and an annual film festival.

New films start on a Friday and tickets go on sale at 2 PM every Monday. Tickets for live and special events go on sale 4 – 6 weeks in advance.

From Friday 13th March, Kino’s new films are The Invisible Man and Portrait Of A Lady On Fire. Plus multi-award-winner Parasite continues.

Also this week is a special screening of independent film Soundtrack To Sixteen with a Q&A with the writers and producer on Monday 16th March at 8.30pm.

’a smart, unexpected delight’ ★★★★ The Times
‘a taut, paranoid thriller that redefines ‘gaslighting’’★★★★The Telegraph
‘Elisabeth Moss is spooked by her abusive, deceased ex-boyfriend in this gripping update of HG Wells’s classic with a Hitchcockian twist’ ★★★★ The Guardian
‘Moss, as you’d expect, is fantastic’ ★★★★ Evening Standard

Portrait Of A Lady On Fire

‘a dazzling work, gripping from beginning to end’ ★★★★★ Time Out
‘a cinematic masterpiece ‘★★★★ The Guardian
‘it’s a film that burrows under your skin and sinks in its teeth’ ★★★★ The Telegraph 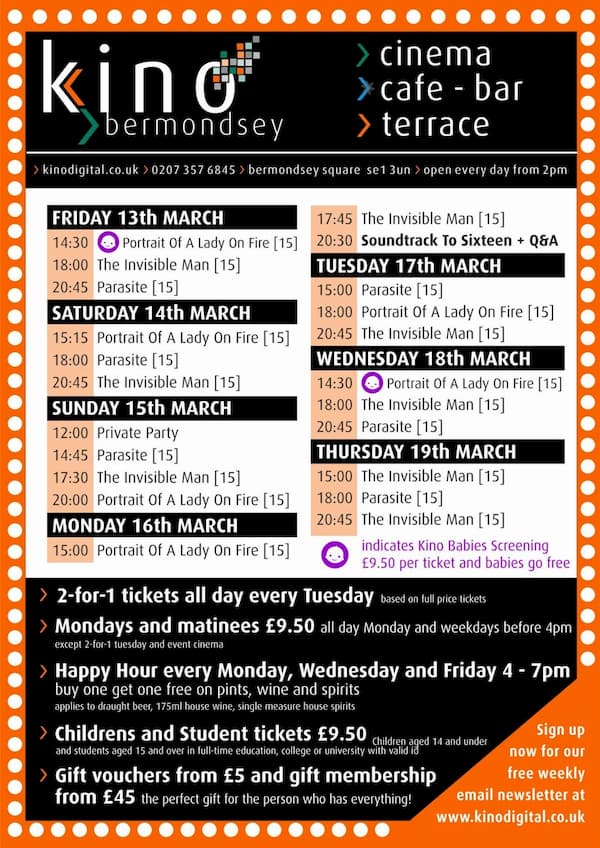