Bermondsey is one of the oldest parts of Southwark with evidence of Roman occupation. Bermondsey’s Thameside location made it an important transport hub for the trade of all manner of goods. It’s success caused The City to enforce restrictions (to preserve its dominance) and earned Bermondsey the nick-name ‘London’s Larder’ due to the amount of food stuffs that passed through it’s docks.

The site where Bermondsey Square is today is best known as the site of Bermondsey Abbey which at it’s height rivalled nearby Westminster Abbey and was an economic powerhouse as well as a spiritual one.

This fascinating film includes footage of the excavations of the Abbey and interviews with the archaeologists. These are presented alongside the wider historical background and give an excellent account of the development of Bermondsey and the Abbey.

The earliest records are from the 8th-century, when Pope Constantine (708-715) granted privileges to a monastery at Vermundesei. It is likely that this monastery continued, probably as a secular minster, at least until the 9th-century Viking invasions.

In 1082 Alwinus Child founded a monastery here dedicated to St Saviour which is described in the Domesday Book as “a new and handsome church”.

The monastery became the Priory of St Saviour in 1089, attached to the French Abbey of Cluny making it an ‘alien property’. In 1380 Richard Dunton, the first English prior, paid a fine of 200 marks (£133.33) to have the Priory naturalised: this protected it from actions taken against alien properties in time of war, but it also set the priory on the path to independent status which it achieved in 1390 by becoming Bermondsey Abbey.

Bermondsey Abbey rapidly acquired a valuable estate, including properties in Surrey, Leicestershire, Hertfordshire, Buckinghamshire, Gloucestershire, Somerset and Kent. In 1268, Bermondsey was granted a Monday market at Charlton as well as an annual fair of three days centred on Trinity Sunday, the eighth Sunday after Easter. By 1535 the abbey’s clear annual income was valued at a little over £474, equivalent to over £7 million today. 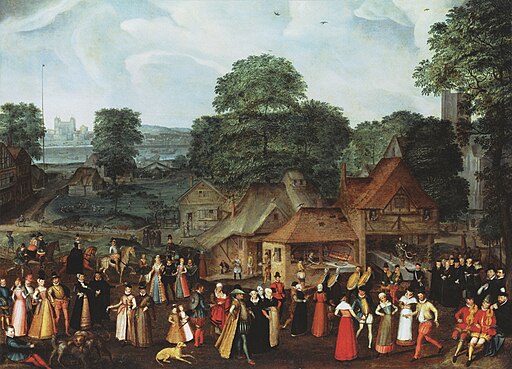 “Fete at Bermondsey c 1569” by Joris Hoefnagel depicts a panorama of English society in the Elizabethan era. Scanned from printed poster. Licensed under Public Domain via Commons.

Bermondsey Abbey was dissolved in 1537 by Henry VIII, and the estate was acquired by Sir Thomas Pope (founder of Trinity College Oxford) who broke up the Abbey buildings and built a mansion for himself.

Parts of Bermondsey Abbey remain visible today. The remains of the south-western tower of the Abbey church can be seen below the glass floor of the Lokma Turkish Grill & Bar on Bermondsey Square and houses on nearby Grange Walk incorporate some of the Abbey’s remains. Within the structure of the late 17th century Grade II-listed houses numbered 5, 6 and 7 is part of one side of the late medieval stone gatehouse. At number 7 is the chamfered south jamb of the gateway with two wrought-iron gate-hooks projecting from the wall and a ‘Gatehouse’ sign.

Blue Plaque for an Abbey

In 2010, following a public vote, a blue plaque for Bermondsey Abbey was unveiled in Bermondsey Square making it the oldest recipient of the award.

Image: The History of London by Walter Besant,1894 (Project Gutenberg)

The Best Bottomless Brunch in Town
Catch up with old friends over unlimited drinks and good...
Happy Hour at Kino Bermondsey
Kino's Happy Hour runs every Monday to Wednesday from 5...
Bermondsey Antique Market
Bermondsey London Antique Market is one of the five best...
Jazzy Christmas Lunch
Enjoy a festive Friday lunch with seasonal jazz performed by...
2-4-1 on Mains Every Friday Lunchtime
On Fridays, you can enjoy two main dishes for the...